Mrs. Annie Munson (Nicknamed Old Lady Munson by some neighbours) is a nagging old woman who is the next-door neighbour of the Burtonburgers, as well as the secondary antagonist. She is grumpy and mean to the males and females of the main cast, but has a soft spot for Millie. It is unknown exactly how old she is, she was elderly when Burt was a child, and even when several senior residents of the street were still children. She has testified to having at least 6 husbands and to having battled Dodo birds. She has collected a massive stash of toys she's confiscated after they fell into her yard over the years; until Coop caused the storage house to explode, raining down decades worth of toys all over the neighbourhood, returning them to rightful owners. When someone (usually Mr. Kat) causes trouble for her, she usually blames Coop, and yells "BURTONBURGER!" She is a secondary antagonist of the series and Millie is the only kid she has been shown treating kindly.

She is a member of the Bootsville gardening club and the Gnome Appreciation club. Her age is likely exaggerated as a running gag, such as Burt saying she doesn't "Look a day over 200!"

In Coop D'Etat, as she was shown being arrested for wrecking the museum. It is unknown how long she was sentenced. (Correction) Her last appearance was in The Incredible Shrinking Coop.

In Kat to the Future Part 2, Her new name was Old Major Munson.

She had wrinkles even when she was younger, indicating she might have been in her 40s or 50s at the time.

She is grouchy and cranky and she only has a soft spot to Millie and not many others. She likes peace and quiet and her lawn. She also likes her lawn gnomes.

in Good Luck Harm Millie says that Mrs. Munson has lucky Underwear and that she never leaves home without them. Kat spies these bloomers on a clothesline, they are pink with frilled bottoms and have pictures of leprechaun heads and horseshoes on them. After the black cat destroys Kat's good luck amulet (which they were incorporated into) she blames Coop for stealing her "lucky bloomers".

In another episode, Millie said she asked Mrs. Munson to adopt her and Mister Kat and that she agreed to this.

She is a big fan of Captain Blasteroid, Coop and Dennis' favorite TV show. This may be due to her being related to the star.

She may teach tango, seen in Kat of Diamonds.

She always her teenee bikini when she steps outside giving Burt and his childhood friends nightmares ever since in Bringin' the Heat. 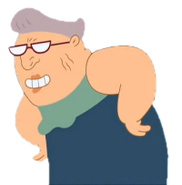 barbecuing
Add a photo to this gallery

Retrieved from "https://kidvskat.fandom.com/wiki/Old_Lady_Munson?oldid=89252"
Community content is available under CC-BY-SA unless otherwise noted.