Kid vs. Kat a Canadian animated television series developed and produced at Studio B Productions.[1] The show created by Rob Boutilier. It's about a boy named Coop who battles with his little sister's (Millie) cat named Kat. The series premiered in Canada on YTV on October 25, 2008 and in the United States on Disney XD on February 21, 2009. The series ended on June 4, 2011. It ran for a total of two seasons and 52 episodes. Along with The Simpsons and Family Guy, Kid vs Kat is the third longest-running cartoon in Canada.

When Coop Burtonburger's spoiled younger sister Millie brings home a mysterious stray cat, Coop's idyllic life is turned upside down. Coop soon discovers that Kat is more than just a scrawny, purple, hairless pet; he is also a smart, conniving, alien mastermind with a fanatical hate for Coop himself. Kat instantly declares war on Coop. The two battle constantly as Coop tries to stop Kat and tell the world about his sinister plans, only to find Kat destroying the evidence, and putting the blame on Coop every time.

This show was originally named Look What My Sister Dragged In. Rob Boutilier created it as a new Warner Bros-y show about an evil hairless cat. In the final stage of production, the title was changed to Kid vs Kat. 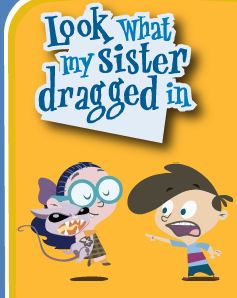 The first season of Kid vs. Kat was produced by Studio B Productions, YTV, and Jetix. Disney XD later produced season two and Disney Channel in 2019 produced more seasons.

On June 4, 2011, YTV and Disney XD announced the cancellation of the series.

Kid vs. Kat creator Rob Boutilier wrote a message on Facebook on August 19, 2011 announcing that there wouldn't be a third season and that he didn't have rights to make further episodes.

The series has since ended with the episode "The Kat Went Back (Parts 1 & 2)".

The series received mostly mixed feedback from audiences. It currently holds a 7.2 at TV.com.[2]

Kid vs. Kat won an award for "Best Program or Series" in 2009, and was nominated for the other three awards.

Kid vs. Kat won an award for "Best Program or Series" in 2010, and was nominated for the other three awards.

Kid vs. Kat won an award for "Best Program or Series" in 2011, and was nominated for the other three awards.

Retrieved from "https://kidvskat.fandom.com/wiki/Kid_vs._Kat?oldid=84857"
Community content is available under CC-BY-SA unless otherwise noted.