Kat possesses superior intellect as shown in "Dial "B" For Babysitter " where he plots a plan against Old Lady Munson, but it was later Revealed in the episode he was only trying to contact other Kats in space. He also has TWO extremely advanced brains as shown in "Nip/Duck."

Kat can survive and recover from the punishment which could seriously injure if not kill normal cats and even humans let alone a human with considerably less damage. Examples:

Kat also has shown that he is acid-proof. In "Kat to the future" Coop shots him with the same acid that previously burned walls and Coop's hair, similar to the acid that Kat spits with. Later we see him covered in said substance, without any burns or negative effects.

Kat could regenerate serious injuries that would kill normal cats or humans, his burns and scratches also disappear after a brief period of time. Sometimes he is forced to wear bandages by Millie even if these are not needed. Examples:

He also possesses a different ability to recreate himself completely, by shedding his skin turning into a group of thermite-like creatures and recombining himself inside of a cocoon, as seen in "Itty Bitty Kitty Committee".

Kat has survived being encased in a block of ice on multiple occasions without any visible evidence of problems like frostbite, a condition that can cause humans to lose limbs or die when the water in their tissue crystallizes into ice.

This happens on Earth in Play N'Ice and Fangs for the Memories. Also in The Kat Went Back Part 1 he survives the vacuum of outer space clutching to a space ship as it travels through a wormhole to the Kat Planet, arriving encased in ice.

Ability to hold his breath

Kat could hold his breath for a long time, as shown in "Down the Drain", while he was moving through sewage pipes with no air, a similar situation happened in "Menace the Dennis". He also was able to survive being encased in a block of ice or even outer space void, without any oxygen.

He is stronger than Earth animals his size. Examples: 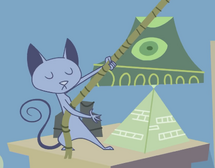 Kat has almost indestructible claws that can break just about any material. They are so strong that the vet needed a diamond-tipped cutter to clip them, and even then the cutter was ruined, even though Kat was able to resharpen them easily enough. This is Kat's most common attack against Coop. He has also been known to shoot lasers from them and weld with them, it is unknown if they are shiny enough to focus light or because of his cybernetics. Probably the latter because he has been shown to do this indoors. In "Kid Vs Kat Vs Christmas" we see that he is able to write with his claws on paper.

His claws can also change into buzz-saws. This has been seen in episodes including "Pet Peeved" and "Over the Radar."

In "Stall That Jazz" Kat uses his claw-like a jigsaw, to cut through the floor of Coop's room and escape.

Kat also is able to fire a red laser from his claws, he can manipulate the power of the laser, from harmless dot, trough force of typical laser handgun, to deadly ray that could cut down the tree in seconds, however, to perform the last one he used glass vase that magnified laser beam. For example, he used this ability in: 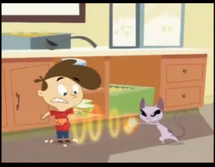 Kat uses this ability to create an expanding pulse-ray of heat, as shown in a short called "Movie Mayhem" and in the episode "How the Test Was Won." With this Ability, he can melt many objects. He used heat rays also in a short called "Boy Meats Grill."

The power to produce heat from his claws. He uses this to melt the ice, steel, iron, about anything. 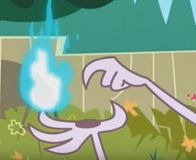 Kat claws could emit fire with varied intensity in two different colours, typical fiery orange in "Boys Vs. Bus" and blue in "Fumblebee". He uses this ability to attack or utilizes it as a lighter equivalent.

Kat is able to use his claw as a key equivalent. He could quickly open doors or even start a car engine using this ability. Examples:

Kat often combines the hard sharpness of his claws with their heat-generating power for an amplified attack: 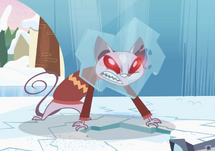 Same as heat emanation but from his eyes, from the episode "Play N'Ice." Kat commonly and always uses this to show off how angry he is and how much rage he is feeling.

In Special Christmas 2/2, Kat uses X-ray vision to see which present holds the Captain Blasteroid Rocket Ship. It is unknown whether he can use X-ray vision in both eyes or just the left one as we only see him use his left eye in the episode. This proves that he is indeed part cyborg.

Ability to see in complete darkness

Kat could get a view of surrounding even without any sources of light. As we can see in "Kat Of Diamonds", while he was using blackout device to steal diamonds or while using remote to control bigger blackout disk.

Kat possesses five rows of razor-sharp serrated fangs made out of titanium that can break through most Earth metals and even the toughest material in the universe, durasteel; one example is when he bent the hockey net Coop was guarding during "Play N'Ice." Another time is when he goes crazy in the episode "Trespassers Will Be Persecuted," because he has been eating catnip; if you notice in the episode, he actually bites off a piece of Old Lady Munson's gnome.

The power to make a pulse, even though he hasn't got one; it is unknown how he is able to do this, but it's probably thanks to one of the Machines he has inside his body.

The power to extend his tail to any length and manipulate it like another limb. Kat also uses his tail sometimes as a lasso. One obvious hint of this power is that Kat's tail is mostly curled up during the show; this proves it has the ability to extend outward.

One advantage that Kat uses all the time is that he doesn't have any hard parts in his entire body at all, just muscle, and the power to change into any shape or form without injuring himself. Kat used this ability on countless occasions, usually to break into a building, or even to break out of something. Kat could also extend his mouth in order to eat something bigger, he even ate Coop in one bite, in short, called "Catboy".

Kat is capable of moving with extreme velocity. Being blurred while doing so. Examples:

In the short "Kat's Dance", he is able to separate his body parts and put them back together without injuring himself, while performing his dance moves.

In "Dire Education" when Kat attempts to exit the ventilation shaft, when he gets in contact with metal his head and also his eyes get fragmented in three pieces.

In "Stall That Jazz" Kat "cracks" to pieces while being extremely annoyed by music played by Coop. 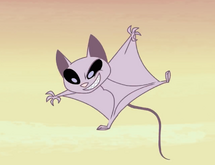 In the episode "Cheeks of Evil," Kat was shown to have the ability to glide, like that of a flying squirrel. This has been seen in "Cheeks of Evil," "Keep On Rockin," "Over the Radar" and "9 to 5 to Oblivion."

Walking across the ceiling

In the short "A Squirrel Wind Adventure," Kat can Walk on the Water.

Can spit acid, in the form of a hairball, to burn through things. Examples:

In the episode "It's A Rocket Man" Kat consumes a dose of rocket fuel. It only causes him to breathe with fire, without further injuries. He probably possesses this ability because of mechanical parts inside him.

In "The Kat Went Back" Kat ate Remote that he used to Control the Portal.

Kat's blood has the ability to mutate certain creatures that come in contact with it, as seen in "Buzz Off!." It is unknown why Kat's blood can mutate creatures.

In "Flu The Coop" Kat gets infected with Coop's cold and starts to sneeze, and in "Hair Brains" we can see short retrospection of ill Kat sneezing at Dennis, which causes horns to appear on Dennis's head. It is possible that Kat's disease was the aftermath of mutation of Coop's cold.

Albeit its unclear that this "mutating" substance is blood or does Kat even has blood, it might be other fluids due Kat's mechanical parts.

Kat can spit evil living hairballs out of the material used for Millie's dolls' hair, as seen in "Hair Brains".

Being able to survive without food or water

According to "Tutankitty", which belongs to the same species that Kat does, Kat and his species are able to survive long years without a source of food or water. The same thing indicates Kat's lifespan, being extremely long, or even without a clear limit.

Retrieved from "https://kidvskat.fandom.com/wiki/Kat%27s_Powers?oldid=87389"
Community content is available under CC-BY-SA unless otherwise noted.