Kat used this feature to arrive on Earth in Let the Games Begin. However, this feature was destroyed when the collar blew up so he had to make manual teleporters.

This makes it impossible for Coop or anyone to get to Kat. This is shown when Old Lady Munson plays with Kats collar in "Dial "B" for Babysitter". 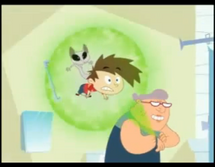 This allows Kat to move things and individuals easily. This is shown when Old Lady Munson plays with Kat's collar in "Dial "B" For Babysitter". 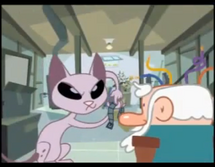 He can use it to control things he made. This is shown in "Dial "B" For Babysitter" in the opening scene where Kat is making some sort of device but fails. 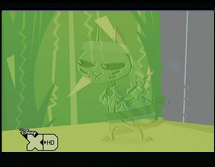 His collar can make him invisible. It was shown in "The Grass is Always Meaner" towards the end of the episode. He achieved it by repairing some parts of collar However, this power soon disappeared once Kat got the collar wet by falling in Old Lady Munson's birdbath. It's possible that Kat is still able to restore it. 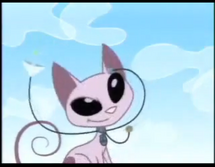 The collar has a detachable clip on it that holds portrates of Kat's Family. 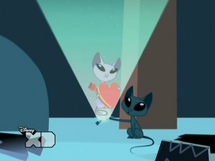 Kat's collar also has the ability to talk to other Catnipians, most commonly his girlfriend.

His collar also has built-in camera, as shown in "Who's Haunting Who?". This device was able to transfer taken pictures to hologram form.

Retrieved from "https://kidvskat.fandom.com/wiki/Kat%27s_Collar_Powers?oldid=85328"
Community content is available under CC-BY-SA unless otherwise noted.