Kid vs. Kat Wiki
Register
Don't have an account?
Sign In
Advertisement
in: Friend of Millie, Friend of Fiona, Friend of Dennis,
and 24 more
English

View source
watch 01:36
We're Getting Mutants in the MCU - The Loop
Do you like this video?
Play Sound

Cooper[1] (Nicknamed Coop) Burtonburger (possibly with the middle name David or Davies, unsourced) is a boy from the town of Bootsville and the main protagonist of the series. He lives with his father Burt and his younger sister Millie. His normal day is spent trying to save the Earth from the cat invasion while trying to just enjoy himself along the way.

Coop gets hurt frequently when he fights Kat, but the damage heals faster than humans normally would. Examples include:

Kat to the Future Part 2 is an exception where future-Coop's damage remains and helps with telling him apart from the unmarked past version of himself.

A season 1 episode refers to him and Dennis as two 10-year-olds but they may have aged a year or two in the course of the series.

In 9 to 5 to Oblivion, Burt finds a good citizenship award that Coop won in 3rd grade, when he was probably around 8 years old.

In Birthday Bashed, When Coop's birthday arrived. he was 11 years old in this episode.

He has blue eyes with black eyebrows that somehow manage to rise over top of his hair, which is short in the back but has some poofy height to it. Dennis once lamented that Coop's hair is the only reason he is the taller of them.

According to Millie upon correcting the tone of crayon chosen by Burt in Amazing Feet Of Strength, Coop's brown hair is "autumn chestnut, not burnt ?(alker/ulcur?)"

His favorite outfit is a red, orange-striped shirt and blue pants

For the bed, he wears a blue set of pajamas. He has also been seen wearing a purple robe and white slippers.

He is the only, member of the BurtonBurger family not depicted wearing glasses (unless Kat counts)

He has three freckles on his toes. (Kat to the Future Part 1 and 2)

Coop likes to spend his free time with his skateboard. He is also into skateboarding, soccer, and just hanging out with his friends (particularly Dennis, Lorne, Harley and Fiona). All of this changes when he is then forced to try to defend the Earth fromKat's schemes.

Coop attends school with his friend Dennis and is a capable student with grades that tend to both rising and fall depending on situations at home. He does try to study and finish his homework quickly due to having to fend off Kat and avoid getting into trouble.

Coop's life at home usually involves a confrontation with Millie or Mr. Kat. This lead to the construction of a Tree-Fort in the backyard, in order for Coop to put some distance between them. Though there are times where everyone can appear to get along, such moments of peace are typically short-lived.

Coop and Burt get along very well, as they have a strong relationship based on similar interests and Burt's own understanding of what life as an 11-year-old boy is like. Coop is shown to care deeply for his dad and has followed his directions almost every time.

"You know what they say, keep your friends close, your enemies closer and your little sisters even closer than that." - Coop

Coop's younger sister Millie regards her brother as somewhat of a nuisance, blaming him for anything and everything she can. While there are moments the two siblings can get along, they are few and far between. Millie thinks that Kat is an important part of the family due to the fact Kat is supposed to be cared for by the whole family.

Coop's best friend Dennis is one of his few allies against the combined forces of Kat, Millie and Old Lady Munson. Like Coop, Dennis also knows Kat's true identity, and together he and Coop try their best to foil the alien's "evil schemes".

Since they were young, Coop and Dennis have done everything together. They enjoy the same hobbies and interests and are both big fans of Captain Blasteroid.

Coop has had a crush on Fiona since they first met, and it seems that she has a crush on him as well, seeing as she admits her like for Coop in Kat of Diamonds.

" This could mean only one thing. We're going to visit Weird Aunt Beatrix!" -Coop

Coop probably does not like Aunt Beatrix. Her trailer creeps him out, she seems a bit odd to him and, based on his reactions, he seems to have been at her place a lot.

"We all have to make sacrifices to rid the world of evil...Kat evil!" - Coop Burtonburger

Kat has cemented his place in the Burtonburgers Household whether Coop likes it or not. Although sometimes seems that they get along, they still sometimes fight. Coop believes Kat to be pure evil and is desperate for a way to prove both Kat's trudevious intentions. Coop is shown to be able to match up to Kat in a fistfight, first shown in The Allergy despite Kat's abilities. Coop also seem to sometime care about Kat, like in Pet Peeved, Kid Vs Kat Vs Christmas Part 1 / Kid Vs Kat Vs Christmas Part 2 and Strange Kat on a Train and he liked how Kat purred and cuddled (even going as far as hugging Kat) around him for saving him from Mr. Cheeks, in Turn the Other Cheeks. It is also shown that he enjoys fighting with Kat and is able to work really well with him and they think alike when they team up, like, in Just Me and Glue, they both lifted the couch cushion to block the robot fist, and Tickled Pink when they both threw that hunk of metal to save Dennis. It is also shown in Fangs for the Memories that if Coop didn't know that Kat is an alien, he would think that he is cute and they would get along.

Throughout the series, Coop can be heard referring to Kat by many different names, usually out of spite or disrespect. It is also uncommon to hear a name used more than once, as Coop appears to think them up on the spot.

Old Lady Munson is Coop's enemy because she always punishes him by making him do backyard chores in her garden, but she treats Millie nicely and is also Burt's enemy.

Phoebe is one of Coops' biggest frienemy since she always is sneaking up on Coop and tries to be his girlfriend. She is also a rival of Millie (sometimes) and Fiona. Coop appears to be scared of her.

Coop became enemies with Mr. Cheeks by helping Kat on the episode Turn The Other Cheeks saving him from a black hole, and battles him again in Strange Kat On A Train with the help of Kat, of course.

Coop does not like Kyle Dustin because he flirts with Fiona in the episode "Board Kat". 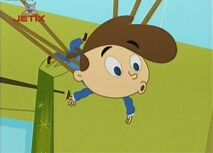 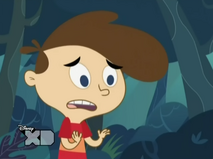 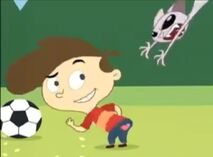 Coop shakes his butt to get Kat down. 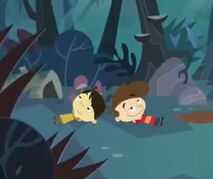 Coop and Dennis are sad due to a treehouse was stole by Mr. Kat

Coop and Dennis are get sad due to a treehouse was stolen by Mr. Kat 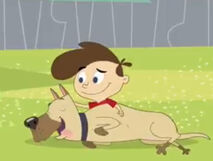 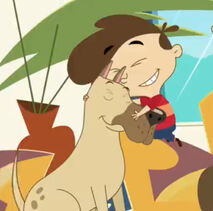 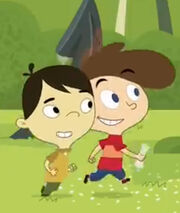 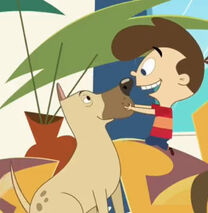 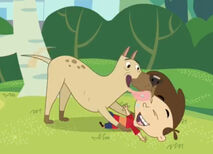 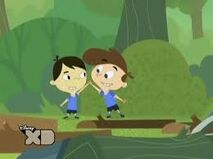 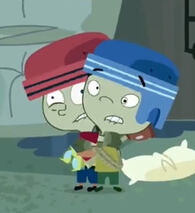 "Fine, Here's something you can handle."

"Yeah, Somebody with bad eye sight."

"I'm not kidding Dennis,Ever since that Cat moved in, My life have been turned...Upside down."

"Were not scared of anything."

"And I took it back the day after I started kindergarten."

"Yeah I guess you will."